Dr. Woodbury's research is in cellular and molecular physiology and focuses on membrane biophysics, particularly vesicle/membrane fusion and its regulation by SNARE proteins and alcohols. This process of exocytosis has been a target for investigators ever since the vesicular hypothesis of transmitter release was established in the 1950's. The figure to the right shows students enacting exocytosis with the BYU campus landscape providing the cellular structures.

Dr. Woobury's approach is that of the classical biophysicist or reductionist. Namely, that by striving to simplify the experimental system as much as possible, the essential mechanisms of the underlying process can be revealed. Much of his research is carried out using native synaptic vesicles, artificial vesicles with reconstituted SNARE proteins, and planar lipid bilayers as artificial membranes.


Researchers in Dr. Woodbury's lab use multiple research approaches and are divided into several teams of graduate and undergraduate students as shown in chart below.

At the University of California, Irvine, Dr. Woodbury used an innovative system, employing video microscopy, to observe liposome-membrane fusion and also discovered that the presence of ion channels in liposomes greatly enhanced the likelihood of fusion. Later, at Brandeis University working with Dr. Chris Miller (Waltham, MA), Dr. Woodbury developed a new technique for fusing vesicles into artificial membranes which greatly enhances his ability to study the molecular mechanisms underlying fusion. In 1990 Dr. Woodbury joined the Physiology Department in the Medical School at Wayne State University (Detroit, MI), where he used these techniques to study the mechanism of synaptic vesicle fusion. In 2001 Dr. Woodbury joined the Department of Physiology and Developmental Biology at Brigham Young University, where he continues his research on synaptic vesicle fusion.

Synaptic vesicles are the packages neurons use to store neurotransmitters until they are released across the synapse following an action potential. Fusion of synaptic vesicles is studied using two separate approaches. In one approach, native synaptic vesicles are isolated and purified in his laboratory from nerve cells found throughout the electric organ of the electric fish Torpedo californica and rat brain. A second approach uses molecular biological techniques to reconstitute recombinant proteins of the synapse into vesicles. In both cases, electrophysiological techniques are used to measure the fusion of these vesicles with a planar lipid membrane. In this way, Dr. Woodbury and his collaborator Dr. Lemos (U Mass) have identified the key role of several SNARE proteins in the fusion process. SNARE proteins form a complex, composed of syntaxin, synaptobrevin (VAMP) and SNAP-25 which drive the fusion process. It is these SNARE proteins that are the target of the extremely potent neurotoxins produced by Clostridium tetani (tetanus) and Clostridium botulinum (botulism).

Current work focuses on structural changes in SNARE proteins due to environmental changes as measured by CD (circular dichroism, fluorescence, and mass spectrometry.  Dr. Woodbury's gratefully acknowledges past funding from the National Institutes of Health (NIH). 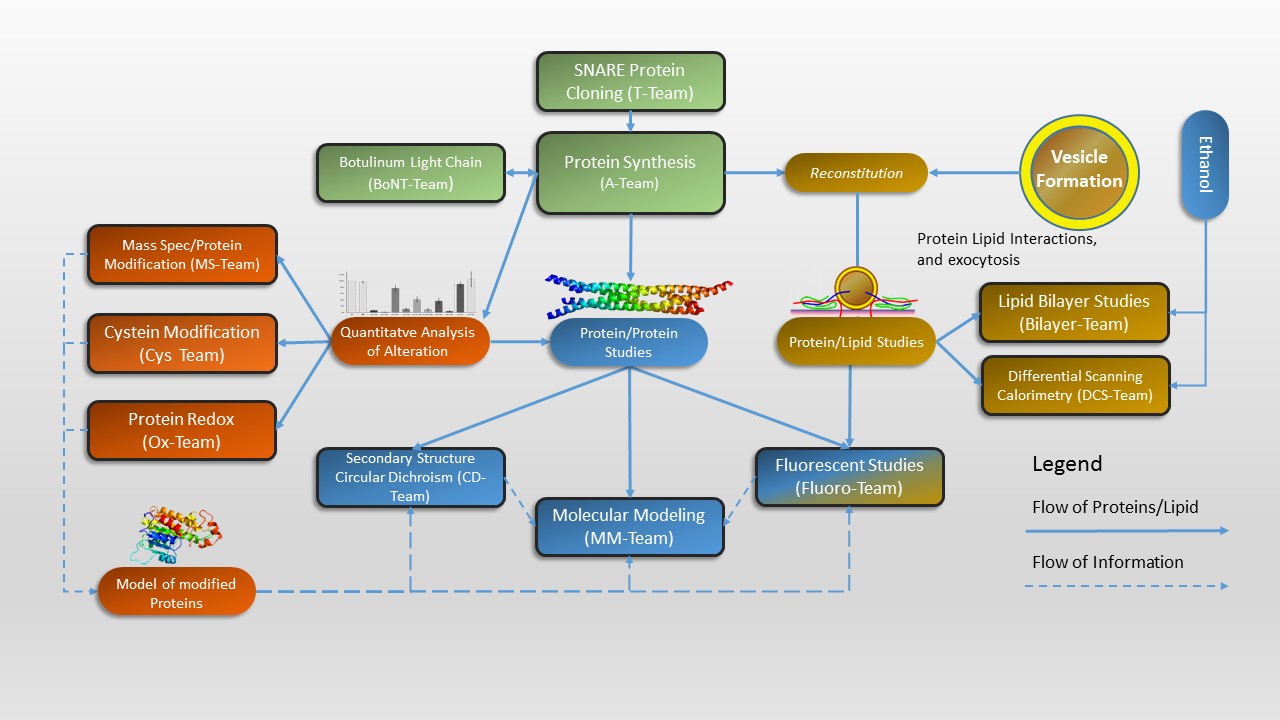 Click on a rectangle above to read more information about the research teams focus.